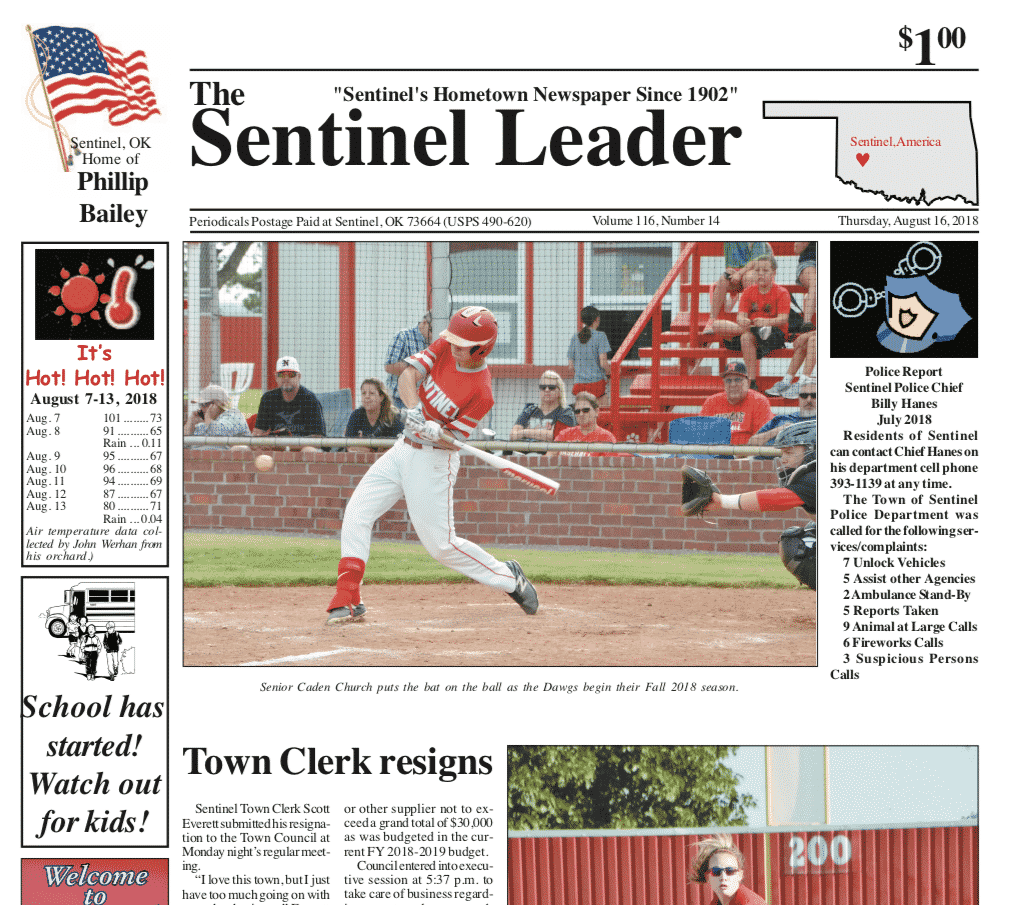 Click the link below and go to page four.

Author’s note: It all seems funny now. This week I am honored to have a quick story I wrote of my short lived high school sports career published in my hometown newspaper.  Special thanks to Judith Reaves and Joleen Wolfenbarger.  It is more than a little goofy and I hope you get as big a kick out of reading it as I did writing it. And, yes, it is true.  There were plenty of witnesses.

It was a great honor to “letter” in Sentinel High School athletics from 1989 to 1991. Well, actually it was not that great of an honor because, in a small town with only seventeen kids in your graduating class, all it took to get on any ball team was to simply raise your hand. There was no varsity or junior varsity. One just needed a warm body.

We had some great teams. But not because of me. I have some serious hand/eye coordination issues. I am a little clumsy but that is not the problem. The eye prescription for my left eye and right eye are vastly different. Later in life I would learn why I had such a flawed sense fo depth perception.

One of the last basketball games I played my junior year was close. It was traditional in my hometown to work the concession stand at the games to earn money for our senior trip that would be coming up next year. So during the girls basketball game the guys would work the stand. Then during the guy’s game the girls would work the stand. The cute girls were down at the concession stand.

It was a district tournament game, so I wasn’t going to see any playing time. It was just a matter of time before our team would be knocked from the tournament. And I was bored. Really bored.

I “warmed the bench” as the saying goes. And after three years of warming the bench I had resigned myself of hope and interest in the game. I did have this going for me. I was congenial and loved to chat. Half time rolled around and I knew the game was close. I understood that even though I was nicely dressed in a polyester red and white Sentinel Bulldogs basketball uniform with black trim and a cool pair of black and red Nike Air Jordan’s, I was no basketball player. Don’t be mistaken, I was a fan. And being a junior I had made peace with that.

This is when I simply rolled down to the concession stand to have a chat with the ladies. While there I ordered myself a Dr. Pepper and a package of peanut M & M’s. One of my girl classmates giggled a little and said in that Western Oklahoma midwestern draw, “Shea, aren’t you playing in the game?” As I put one hand high upon the wall and leaned over the concession stand counter, I thought, “don’t be fooled by the fact that I have a letter jacket and am wearing this near skin tight basketball uniform with short shorts, I am certainly not playing in this game”. All one needed to do to get these items was to raise one’s hand on the first day of school and say “I want to play sports instead of physical education. (aka P.E.)”

I smiled, paid for my candy and soda and made my way back to my seat at the end of the bench.

The buzzer buzzed. Coach Ronny Ridling put in the starters. My brother and the other boys positioned themselves around the circle to get the jump ball. The referee whistled and the game started. I leaned back and broke out my drink and began to rattle that package of M&M’s, tore off the top and began snacking.

Ronny was an intimidating coach. He took it seriously. He was an athlete himself and when he was young was drafted into the Philadelphia Phillies minor league. He wasn’t to be messed with. He had his hands on his knees and was leaning forward, watching every move our starters were making.

However, I was beyond caring at this point as my future high school basketball career was clearly laid out before me. I couldn’t shoot. I was in terrible shape. That polyester basketball suit itched. I was warming the bench and as a fan had one of the best seats in the house.

I’m not sure what caught his eye. I think it was the bright yellow wrapper or the aluminum can sound when you crack open a cold drink. Or perhaps it was the snickering from my fellow players. His head whipped around. He looked down the row and exclaimed,

Startled, my heart leapt in my chest and my hands immediately got sweaty. But I had enough charm to save my life. I looked at his red face and as I pointed to the score board simply said with a smile “Coach, are you really going to put me in there?”.

The game was close. He got a huge grin on his face, began to shake his head and said “no”. To which I leaned back and thought, “Well, I think I’ll have my soda then.”

And that is how my high school basketball career ended. Sure I would always have a seat on the team. I just figured I was a better fan.